“I have always painted things I am obsessed with and always gone with my heart regardless of convention.” 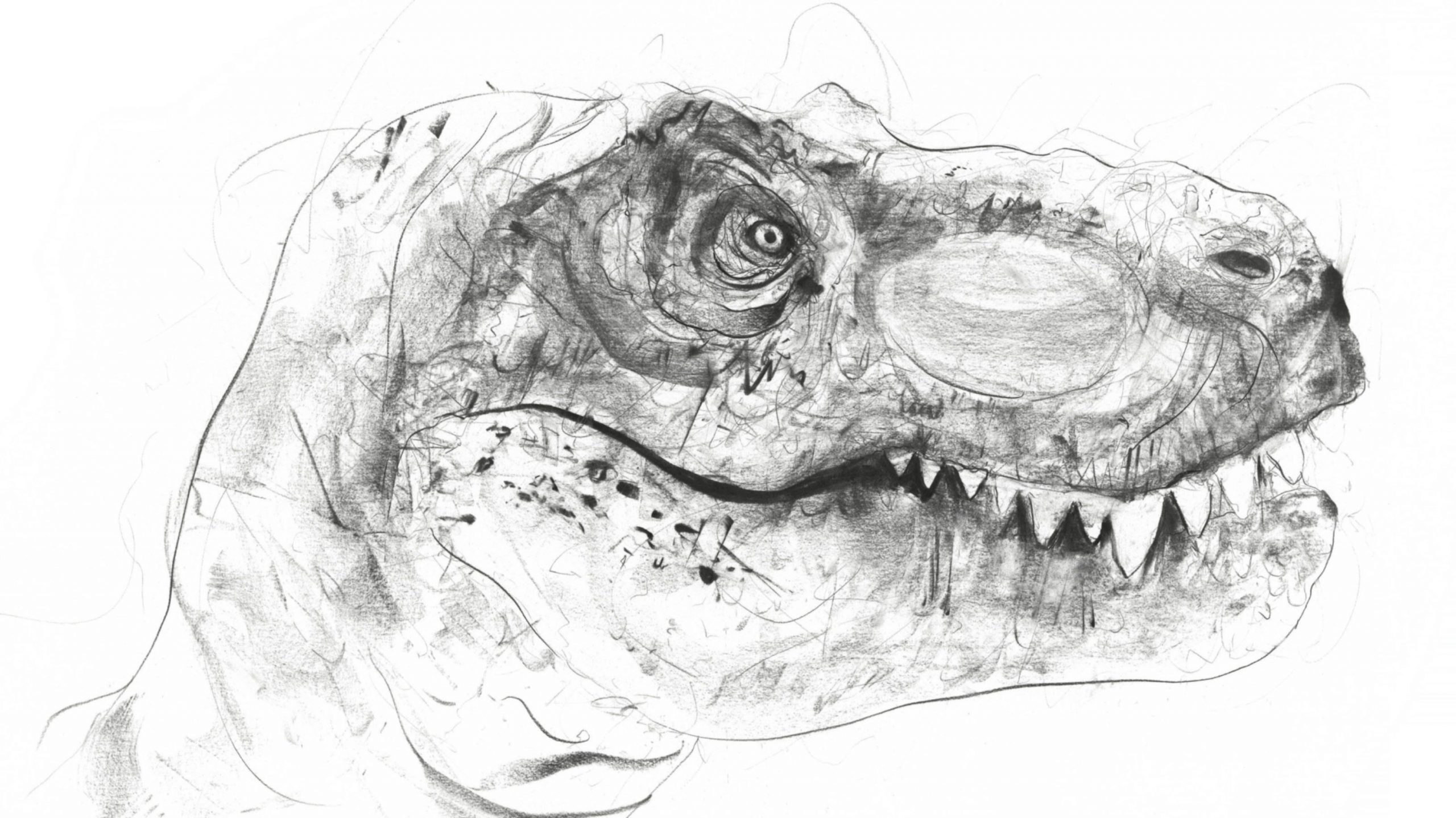 Dave White came to prominence as the pioneer of the ‘Sneaker Art’ movement, reinterpreting popular trainers as oil portraits. He has is own signature Air Jordan release with Nike. It’s swoosh free and emblazoned with stars and paint splashes. He has gained the moniker of ‘the UK’s Andy Warhol’ though his career has been longer than 15 minutes, having started back in 1991 when he enrolled at John Moores University to study fine art. He has had many notable collaborations and commissions through his career (Coca-Cola, Nike, Hang Up Gallery, New Museum of Contemporary Art in New York to name a few).

I first noticed his work on release of his ‘Natural Selection’ collection. A set of watercolours, oil paintings and prints of endangered animals. The collection was his call to action to protect these animals. There was nothing sentimental in the pieces, rather they captured the beauty, majesty and magnificence of these rare animals in a dynamic and expressive way. Some strokes seemed to have been violently created to emphasis the urgency of the action needed.

His new collection ‘Extinct’ which has been exhibiting since the 8th of February focus on his childhood fascination with dinosaurs. The collection was created in secrecy over an 18 month period but one of the first studies for it was in his sketchbook almost ten years ago. However this sketch was one amongst many that produced his ‘Natural Selection’ exhibition, so was set aside until now.

The passion and obsession he has for his subject matter reverberates amongst the pieces and is deeper than the eighteen months it took for this collection. In an interview with Hang Up for the launch he said  “I have spent my whole life looking and obsessing over these incredible creatures and research was indeed the first port of call. Lots of reading, a lot of drawing and studying not only dinosaurs but lizards and focusing on things like camouflage and texture. I have explored many sources in my research. Usually I spend endless hours at zoos and wildlife parks observing my subjects behave at will. With these I have done the same but immersed myself looking at skeletons, anatomical drawings, and sculptures around the world”. 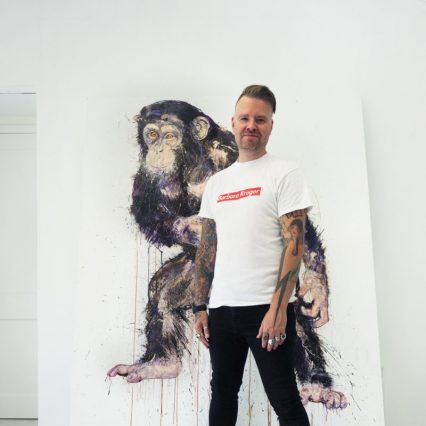 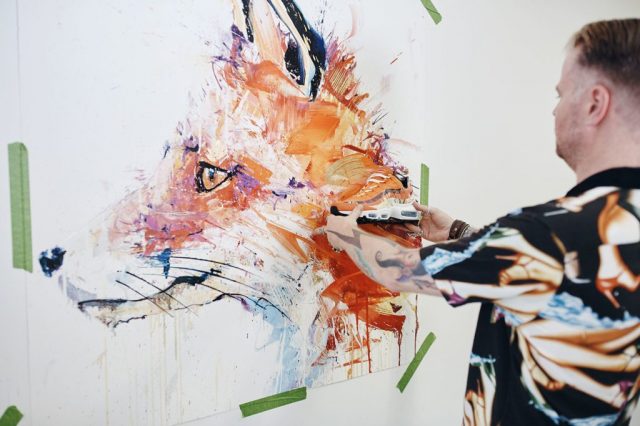 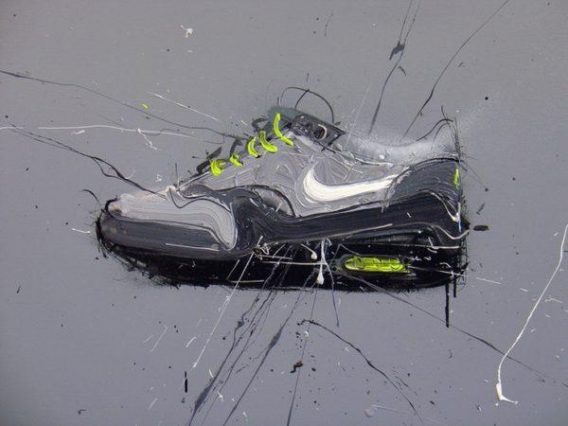 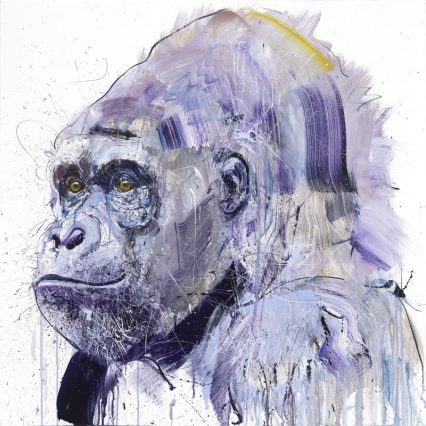 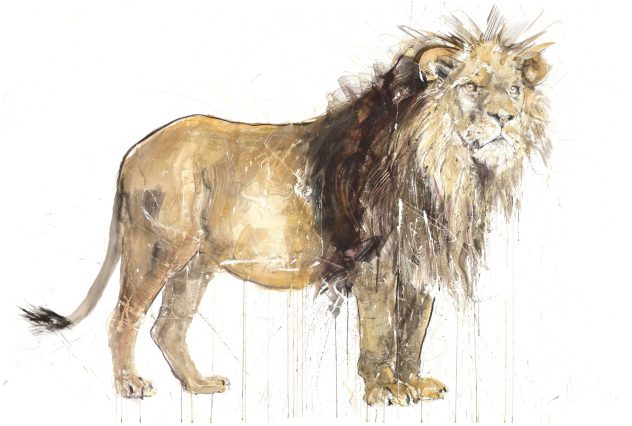 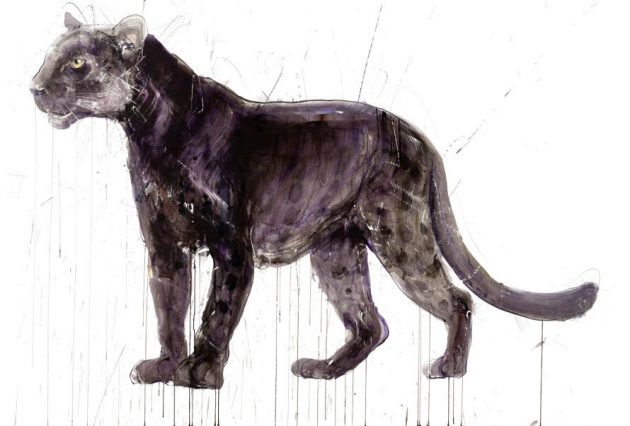 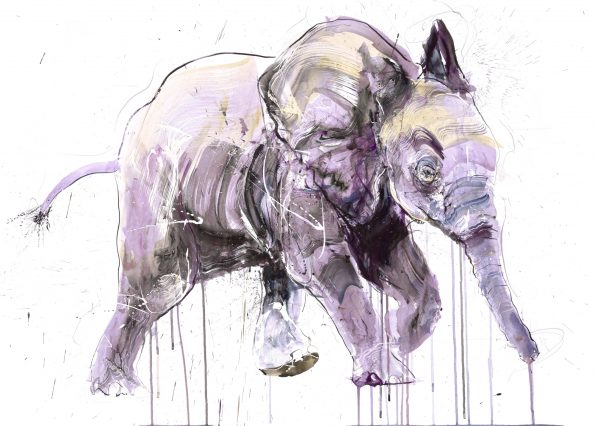 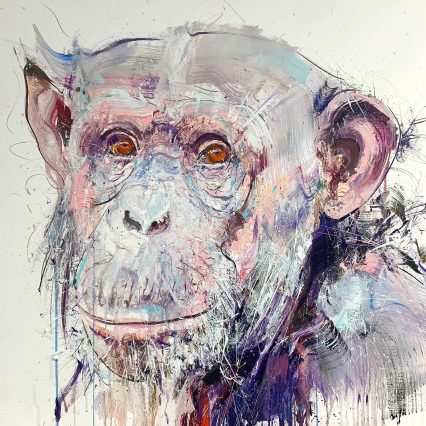 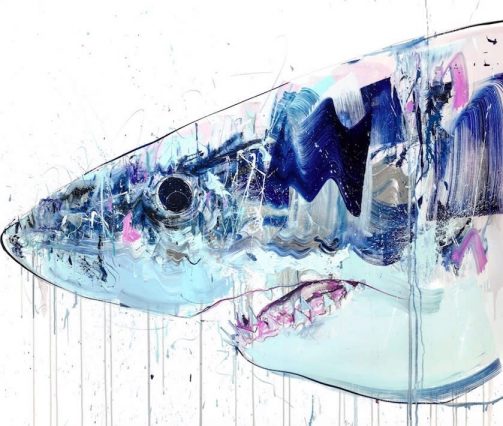 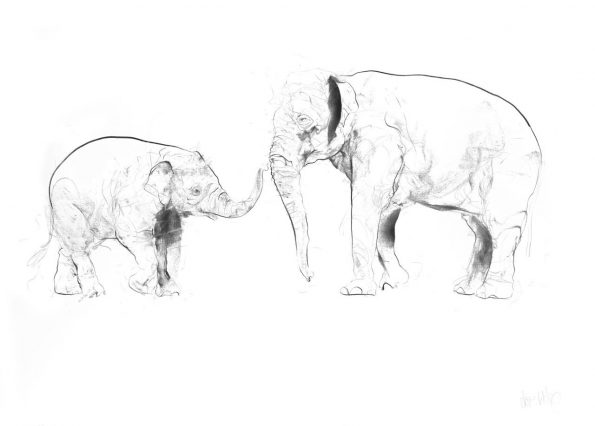 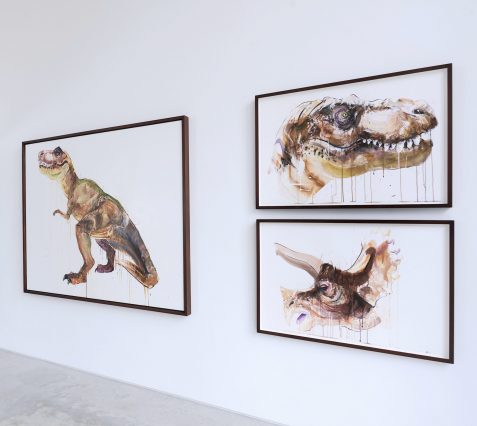 Extinct at Hang Up Gallery 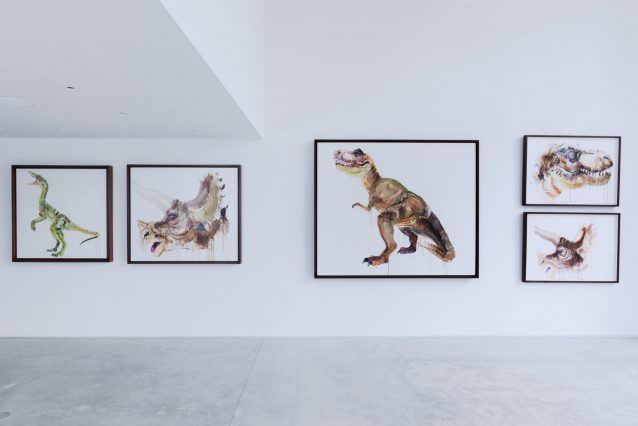 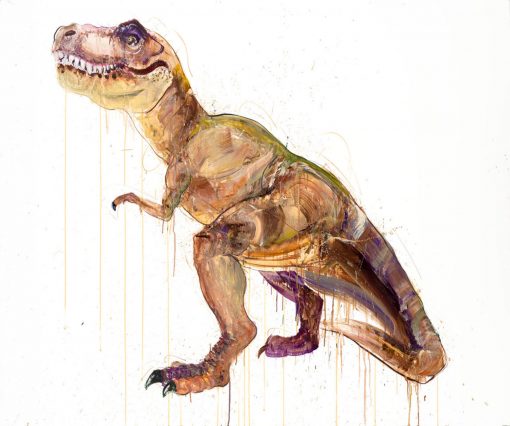 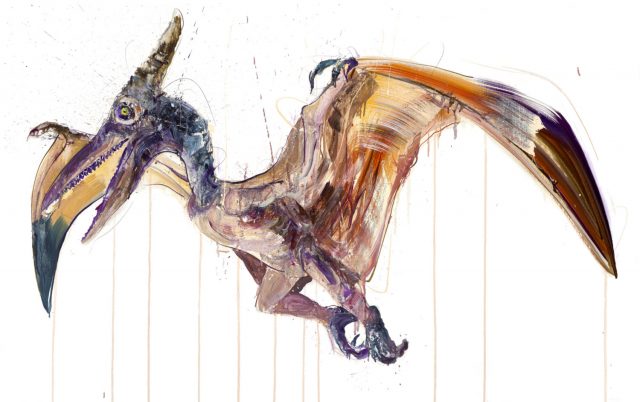 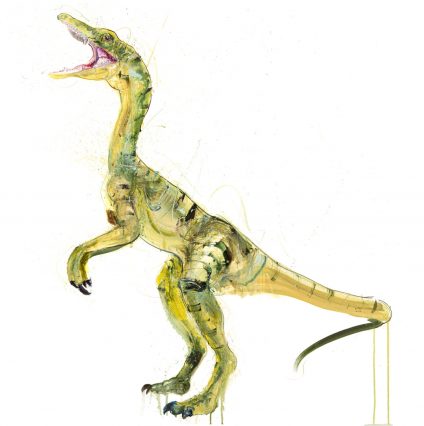 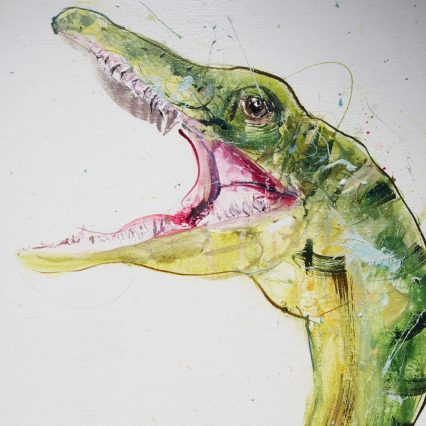 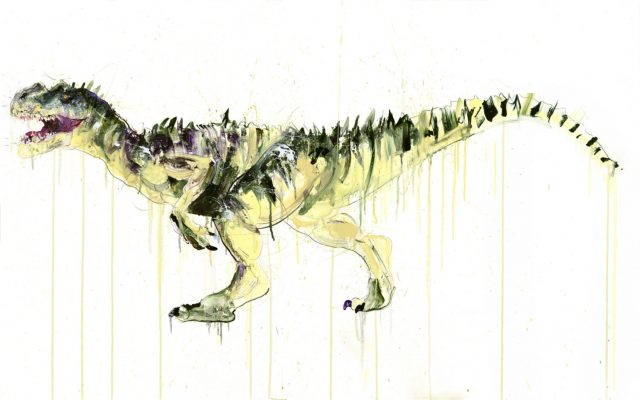 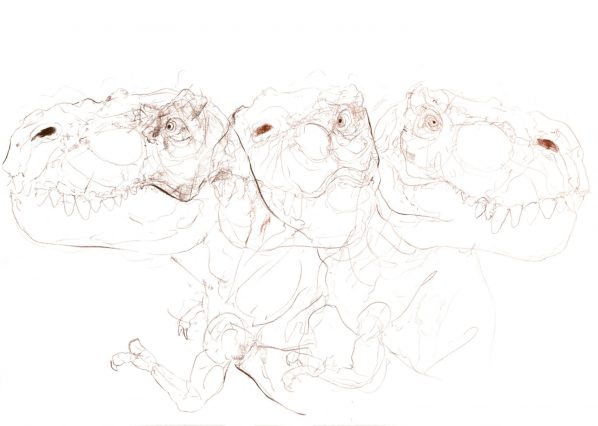 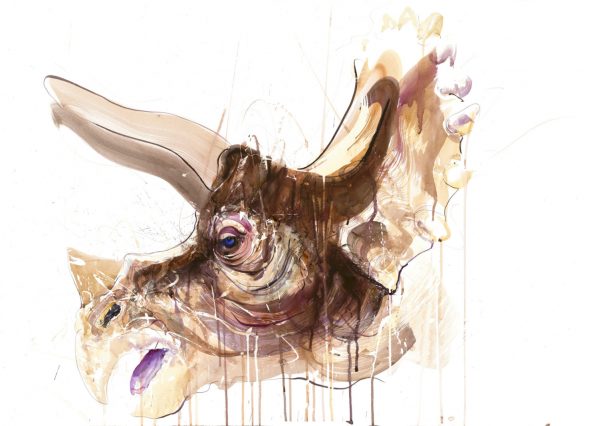 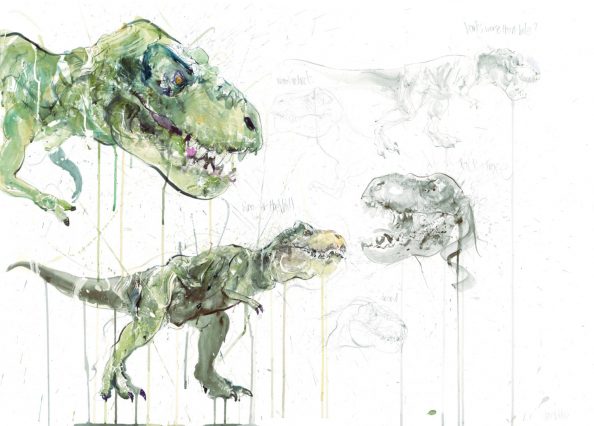 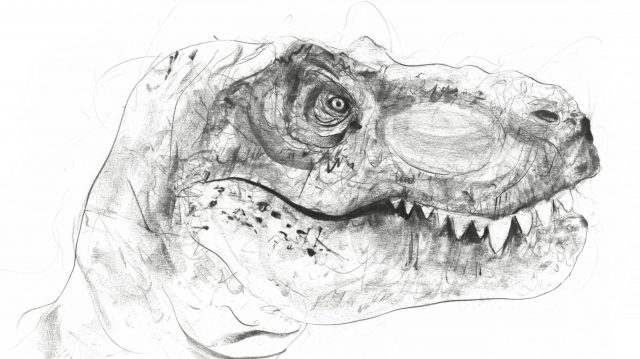 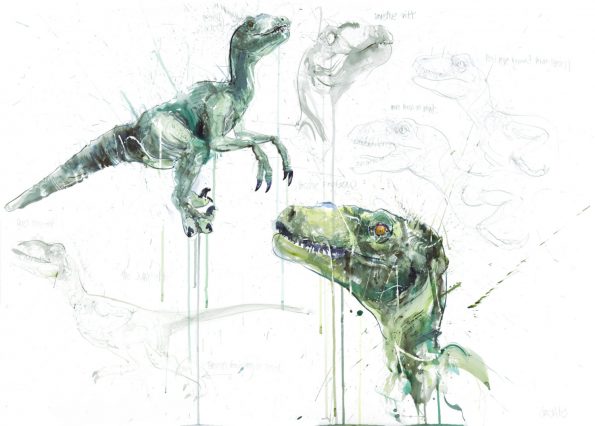 Dave White’s contemporary style is abstractly expressive but he also captures the prominent detail of his subjects. The drips of colour add life to the subject and do not suggest haste in his execution, in fact the opposite. Looking at the runs of paint that adorn his main pieces it is hard not to imagine that thought has gone into their placement. That every stroke is thought through and calculated in minutia, even if the cognition only took milliseconds – true artistic instinct. His use of colour to convey the light falling on his subjects is potent. Ultimately though it’s the simple strokes that give expression and life to his subjects that set him apart.

Dave White’s eclectic interests and sources of inspiration excite me about what may be yet to come. He said in an interview that if he hadn’t been an artist he would have been a Navy Pilot and that as a child he drew endless pictures of planes dogfighting. Maybe then an engineering collection? As he has confessed, his inclination to go with his heart is probably the reason his art is elevated above some of his contemporaries.

“There have been a few moments in my career where my decision to focus on specific subjects has raised eyebrows, the sneakers in 2002, Animals in 2010 but they are classed as pivotal moments in my career and what I am best known for now which I find interesting. I have always painted things I am obsessed with and always gone with my heart regardless of convention. The biggest surprise is people seem love them as much as I do.”

Below are some interviews dating back to the launch of his key exhibitions. I do have a nagging suspicion that he and Banksy may not be all that different.