It’s the difference between listening to Shakespeare being read by Brain Blessed instead of Patrick Stewart. Both would be enjoyable but one would be better nuanced. 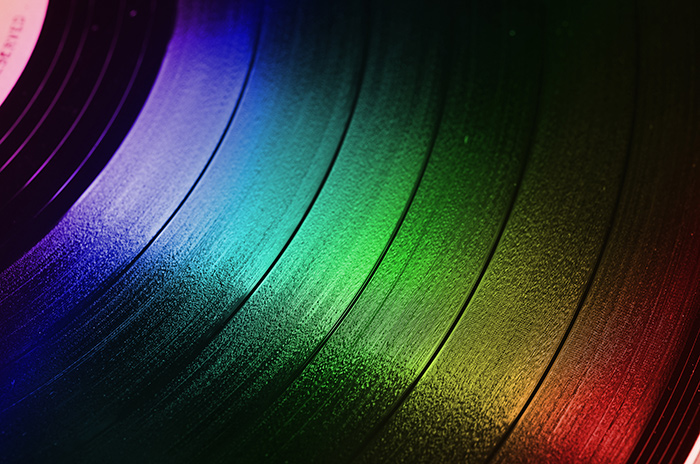 My younger brother had a great knack of extracting Sony Walkmans from my father. They were meant to be shared, but invariably arguments ensued as which of us three had dominion over a given device. The best Walkman that my father was ensnared into buying was the Sony WM-DD100 or to give it the proper nomenclature, the Boodo Khan Walkman. A device that cost $200 US dollars back in 1987 and had a set of professional studio headphones that could be paired with it for a similarly exorbitant amount of money. I believe my brother exploited the fact it had two headphone outputs, convincing my father he was saving on having to buy another Walkman for me or my youngest brother.

Having lost dominion over most of the devices my brothers held, I managed to acquire an electric blue EX 618. To my juvenile brain a far cooler cassette Walkman than the DD100. It languishes at the bottom of a draw in my study to this day. If I could find a cassette, I am sure it would play it with ease. We quickly moved on from Walkmans to Discmans, Mini Discmans, a various assortment of mp3 players and finally along with 3.5 billion others began utilising our smart phones for music playback. Also like everyone else;  along this journey our purchase of music had become digital and biased towards streaming, driven by convivence, accessibility and the reassurance that the quality of the sound was unchanged since the days of vinyl and cassettes. An assurance I find less convincing these days.

Increasingly over the last few years the pleasure from listening to music for me has waned, with the sound I heard  becoming less immersive than I use to remember, lacking depth and vibrancy. I honed in on the fact the quality of the recording I am now listening to is to blame. I did realise that there are other confounding factors that may be contributing to my dulled musical experience, not least the damage I have inflicted on my ear drums over the years by using headphones turned up to eleven or the fact that my formative discography harks from the late seventies and early eighties, a time when my hearing was 30 years younger. 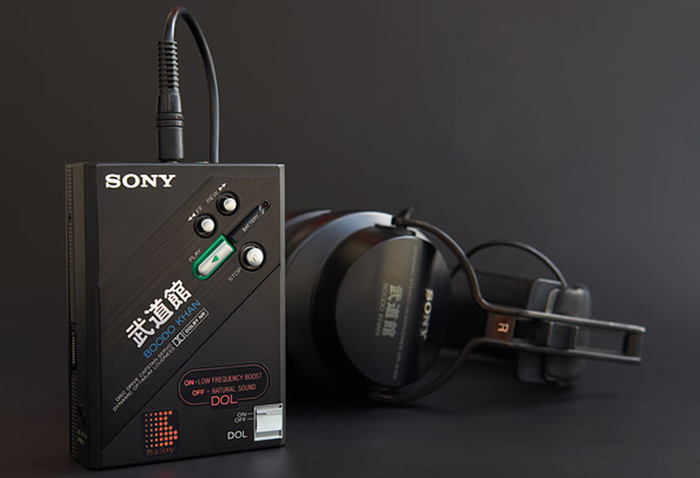 The SONY Walkman Boodo Khan. Now worth over £500.

So why do I think it is all down to the quality of the recording? When we graduated from vinyl and cassettes to compact discs i.e. from analogue to digital we made our first compromises. A digital recording is a really a snapshot of the analogue wave taken at a rate of 44,100 times a second, with the snapshot level at a certain accuracy. For CDs the accuracy is 16-bit, which means that each snapshot can only be one of 65,536 possible values. Of note DVD audio is sampled at 192,000 per second and has a bit rate of 24 (so 16,777,216 output levels).

The switch from analogue recordings to digital was sold by the record companies  as a quantum leap in quality. That was true to an extent,  the vinyl pops and crackles no longer existed or that tape recording hiss (a hiss that would get worse and worse the more times the recording had been dubbed). Also in real terms the clarity of the sound without ectopic pops was startling at first. Moreover the fact you could spread marmalade on this new digital media, wash it off and still reproduce the original digital sound was simply astounding. We were even led to believe that CDs were imperishable, this however was a feat even beyond CDs as we were to learn later.

As the internet burst into life coupled with the advent of personal mp3 players another compromise was made, though at the time it still seemed to us the next evolution, thrusting us into our perceived utopian high-tech future. The space needed on a hard disk for a 74 minute CD recording is 650 megabytes (MB). By modern standards 650 MB is not much considering the average smartphone storage capacity crossed 80 gigabytes (GB) at the end of 2019, so the ability to store 123 CDs or 9,102 minutes of music. At the advent of compressed digital music files,  to transport them and allow improved storage, compression algorithms were created and standards adopted across the digital music universe. MP3 has been the most enduring audio compression format that was born from that necessity.

MP3 compression works by reducing (or approximating) the accuracy of certain components of sound that are considered (by psychoacoustic analysis) to be beyond the hearing capabilities of most humans. This method is commonly referred to as perceptual coding or as psychoacoustic modelling. The remaining audio information is then recorded in a space-efficient manner, using MDCT and FFT algorithms. Compared to CD-quality digital audio, MP3 compression can commonly achieve a 75 to 95% reduction in size. For example, an MP3 music file encoded at a constant bitrate of 128 kilobits per second (kbps) would result in a file approximately 9% of the size of the original CD audio.

A 128 kbps is considered being at the lower end of the conversion rate needed to listen to music (though I remember downloading tracks converted with bitrates of 96 kbps from certain peer to peer networks, mainly due to my archaic modem). A bitrate of 320 kbps is considered identical to the original CD recording. Most modern day streaming services use 192 kbps as their standard.

Do these variations in conversion rates really make a discernible difference? Probably not if you mainly listen to music through headphones or on small portable speakers. Though, I do believe that even though the sound is reproduced with no obvious degradation in quality it still lacks a vibrancy and has a flat affect. It’s the difference between listening to Shakespeare being read by Brain Blessed instead of Patrick Stewart. Both would be enjoyable but one would be better nuanced.

In drawing my own conclusions; that I needed to reinvest in quality to rejuvenate my enjoyment of music, I encountered a webpage that provided some lucidity as  to whether I was actually becoming a music snob: https://www.theverge.com/2017/4/5/15168340/lossless-audio-music-compression-test-spotify-hi-fi-tidal.

It has three recordings each presented at 160 kbps, 320 kbps or at 1,411 kbps (this rate is called high-fidelity or lossless and represents a version close to the original studio recording).The webpage allows you to test if you can tell the difference between the three versions of each sample recording. Play these samples through a set of normal speakers (I used my desktop computer ones). Also guess rapidly by playing each once only – we don’t normally ‘concentrate’ when listening to music. I could tell the difference, though the difference between 320 kbps and 1,411 kbps was almost indiscernible.

So armed with the knowledge that my ageing ear drums still had some youth in them, I began to source my music from different sources. I have switched my streaming and digital music purchasing to the TIDAL Platform. TIDAL (for US$19.99 per month) provides music in lossless, CD and Master Quality Authenticated (MQA) quality – so at 1,411 kbps. They have other tiers and discounting programmes for families and students. Moreover TIDAL is owned by artists, these are Alicia Keys, Arcade Fire (Win Butler and Regine Chassagne), Beyoncé, Calvin Harris, Claudia Leitte, Clifford “T.I.” Harris, Coldplay, Daft Punk, Deadmau5, Jack White, Jason Aldean, J. Cole, Kanye West, Madonna, Nicki Minaj, Rihanna, Shawn “JAY Z” Carter, Damian Marley, Indochine, Lil Wayne, and Usher. What this means is their model delivers the highest rate of compensation to artists of any streaming platform. That rate doesn’t differentiate whether an artist is on an independent or major label. So whilst the subscription rate is high it is offset with by a  smugness it affords the subscriber.

TIDAL does provide a better music listening experience in my opinion. Other streaming services are considering launching their own lossless subscription services, so there will be more choice and competition going forward. The switch to high-fidelity on the whole is to be recommended. However whilst the majority of recordings gain greater depth of sound, some have their shortcomings exposed with this new found quality. There was a recording of Pavarotti that I came across where the MP3 version sounded better. On the TIDAL MQA version it was obvious that the orchestra and the maestro were recorded in two separate sessions and venues. The compressed version hid this and amalgamated the two recordings better.

Despite my new found digital quality, I have also embarked on collecting certain albums in vinyl again. So going full circle and returning to analogue recordings. Somehow those pops and crackles for me add to the listening experience, encapsulating a reality that is lost in the digital sphere. It seems I am not alone in this rekindling of vinyl. In 2019 vinyl sales grew for a 12th consecutive year, with 4.3 millions LPs sold in the United Kingdom (UK). Vinyl albums now account for 1 in 8 albums purchased in the UK across digital and physical formats. I was not surprised to see that the third best-selling LP in 2019 was Fleetwood Mac’s Rumours. If you are old enough to have used some of those mail order LP subscription services in the eighties, you’ll remember Rumours, along with Tubular Bells and Thriller were always the best sellers. I even bought my better half a LP as a Christmas present this year (Taylor Swift – Lover), this is a part of bigger plan to get clearance for installing a HI-FI system in the adult sitting room, wish me luck with that! 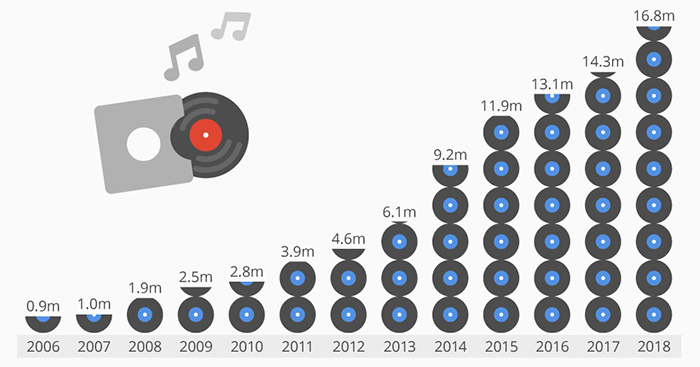 I personally believe that the access we have to music in the modern age is taken for granted by us. We consume it at a phenomenal rate, streaming one track after another rarely whole albums. Music has shaped, defined, comforted, inspired, transcended and brought our species together from the earliest days of our birth in what is modern day Africa. I don’t think it should be treated as a consumable and that sometimes being mindful of what we are listening to is warranted.